Posted on August 13, 2018 by jamesbradfordpate 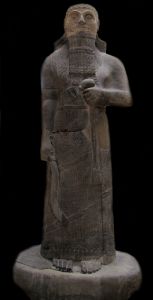 Shalmaneser III’s prayer to Mulissu provides insight as to how Mesopotamian kings functioned in the cosmos, especially their relationship to deities [1]. By function, I don’t simply mean how they ruled; rather, I mean how they fit into the world- and theological- view of ancient Mesopotamia more broadly.

This text may be summarized succinctly: the speaker requests Mulissu’s blessings for the king because he supports the deity’s particular temple [2]. Within this text, three aspect of the king’s role in the Mesopotamian worldview emerge: (a) his role in temple rites and rituals and (b) his role in maintaining the temple, (c) both of which point to his role to do the will of deities.

First, the king is portrayed as participating in rituals and rites within this text:

“… [the one] who guarantees your offering, who maintains [your] food offerings…