Posted on October 31, 2014 by jamesbradfordpate 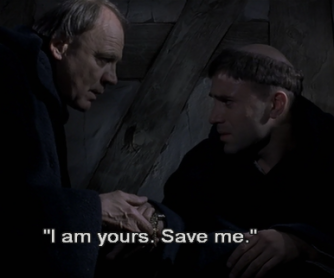 Johann von Staupitz instructs and comforts Luther in the 2003 Luther movie, urging him to look from his sin to Christ

I believe that Scott Hendrix, in his book Luther and the Papacy, does a fine job in showing why Luther came to doubt the papacy’s fulfilling of its duty to take care of Christ’s sheep (all bold and italics mine):

“Although his study of the mass [in 1507 in preparation for his ordination] scarcely weakened his ties to the pope, in Luther’s memory his internal struggle with confession was very much related to papal authority.  The writings of John Gerson (d. 1429), mystical theologian and reform-minded chancellor of the University of Paris, played an important role in helping Luther recognize this relationship.  Several times in his Table Talk Luther identified Gerson as the…